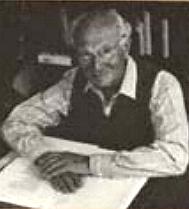 “The academic disciplines which have been traditionally charged with the history and analysis of literature have been caught unaware by the impact of mass literature, the best seller, the popular magazine, the comics and the like, and they have maintained an attitude of haughty indifference to the lower depths of imagination in print. A field and a challenge have thus been left open and the sociologist will have to do something about them.” Sociology of Literature, 1948

The Daemonic. Concept of a Negative Philosophy of Religion, 1921