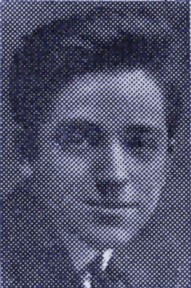 As a life-long labor activist, William Gropper, created some of the most powerful social realist proletarian artwork during the U.S. Great Depression. Youngstown Strike, above, was inspired by the "Little Steel" strike in 1936-37 by workers at the Youngstown Sheet and Tube Company, Youngstown, Ohio. The strike, which eventually led to the formation of the CIO, involved violent confrontations with police guards. One clash resulted in two deaths and many injuries to the strikers and their families. Gropper visited Youngstown during the strike and also published and article and a series of sketches depicting it in The Nation.

Interestingly, the Youngstown painting is not of events at the 1937 strike, but of a remarkably similar earlier Youngstown steel strike. In 1916, thousands of workers stuck for higher wages and improvment of factory conditions. As in the 30s, violence between strikers and guards resulted in the shooting deaths of three strikers and dozens of injuries. Gropper and other social realists of his time would often use the ghosts of past events in their work to explain exploitation of labor and the false promises of the unrepentant ruling class.

Gropper was born in 1897 into poverty on the lower East Side of New York. His mother worked as a seamstress, an occupation he would depict in his work many times. Gropper quit school at 14, worked twelve hour days and took art classes at night, being very influenced by Robert Henri and George Bellows of the Ashcan School. He would find work as a young adult as an editorial cartoonist, contributing to many mainstream as well as socialist newspapers and magazines. Gropper travelled the world to document the times with paintings, sketches, lithographics and murals. He visited Russia in 1927 with writers Theodore Dreiser and Sinclair Lewis, toured the Heartland in the 30s for a series of paintings on the Dust Bowl, cover the United Nations charter conference in San Francisco for Freiheit and the New Masses in the 40s, and in Europe, saw the devastation and chaos wreaked by World War II.

Gropper's often satirical work got him into trouble with authorities more than once. In the 1950's, labeled a subversive artist, Gropper was subpoenaed to testify before the McCarthy committee. He refused to appear. A blacklisting resulted, galleries stopped exhibiting his work, bad publicity, intimidation, and threats followed. It was during this time, 1953-56, he created his "Caprichos" series of lithographs, such as "Piecework", shown right. The bold, sharp contrasts and disjointed figures in the Caprichos reflect his anger, frustration and dismay for his experience and for a society that could produce McCarthyism. His bitterness never led him to stop producing art, he went on to have numerous gallery shows and would regain his stature as one of America's most important artists of his generation.