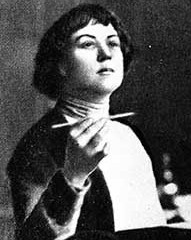 SUCCESS TO OUR WORK
Letter by Comrade ALEXANDRA KOLLANTAI (People’s Commissar for Propaganda) to Comrade DORA B. M. MONTEFIORE

Dearest Comrade and Friend, – It was quite a treat to hear at last from you dear Comrade Montefiore. How happy I should be if I could show you all the revolutionary and really constructive work that has been done in these last few years! Sometimes it seems as if centuries have passed, the change all around is so great. Not only in the institutions, but especially in the psychology. For instance: In the bourgeois Capitalist States one regards a commercial man, a merchant as “a decent citizen” who does not commit or buys at “normal” prices. How different is it now in Soviet Russia! We have no dealers, no merchants, no shopkeepers as a normal and legal thing; and if people do speculate, and sell and buy, they do it secretly, knowing that commerce is a crime, not only by law, but as a moral and social principle. Here we have the great change! It would have needed a hundred years or more to make people understand that only labour, productive labour, is regarded as normal and is esteemed by social opinion; now we have this evolution of mind accomplished in three years’ time!

Relations Between Men and Women.

Many other examples show the same thing. Especially is this taking place in family life and in the relations between men and women. The women are getting more independent and more sound; new and healthy relations, based on solidarity between men and women in our first workers’ republic of the world.

We laugh at the stories which the bourgeois papers publish about Russia especially about the nationalisation of women! ... Poor bourgeois correspondents! They have no idea how the working and peasant women have grown in these few years, of their self-activity in a new workers’ State, where the woman is regarded as an equal! Who could venture to “nationalise” a free, independent and, politically as well as economically active citizen woman of our Soviet Russia?

I should like to see the faces of the liars who tell such stupid stories about us, if they asked a Russian working class girl if she was “nationalised"! They play such an active part in our revolution that old prejudices against the sex are dying out little by little.

Women in the Government

We have women not only as Soviet members, but also as presidents in local Soviets. Many women act as commissars in all branches of social and State life, and at the front. One has even been decorated with the Red Star for her work as Political Commissar at the front during these years. We have had even one People’s Commissar,[1] and hundreds of Communist women are at the head of different State departments, especially in the Commissariat of Public Health, of Social Welfare, Public Education and Public Feeding (organisation of communal kitchens and rationing the goods to the population according to our labour card system).

Our Party is doing good work amongst the working women. We have a special women’s section in each local party committee. I am now at the head of the whole work. We have about 400,000 organised women, the majority of whom are Communists belonging to the Party (no sex division, no special organisation of women in the Party itself). The rest are grouped round our Soviet work, controlled by our Communist Women’s Department.

Our work is much harder when we try to get at the peasant women! But little by little we succeed in gaining their sympathy for Communism.

A very good method of enlightening the women is by the so-called “non-party” conferences, where we, the Communist Women’s Department, invite delegates from all the villages, factories, workshops and housewives (elected in Town-District Conferences). Political and economic questions are discussed, and generally the non-party” conferences end by passing all our Communist resolutions!

Our tactics are: less agitation, more deeds! More practical work to help the working women, who have to suffer much under the hard conditions of a transitory historical and economic period!

We have seventy four weekly papers for working women (a paper in each Government Province), a monthly paper, a weekly official bulletin. The work is growing fast. Under our influence we are now working out a law on prostitution.

But what I would like you to see is our children’s social education! The institutions are not new as regards organisation — but the spirit that prevails there is new and inspiring! And the children are so happy in our homes for babies, or in children’s homes! You must not think that we take the children by force from the mothers! Nothing of the kind. We not only try to help our working women who are over-burdened with work at home, and with professional work, and use their labour energy more productively for the sake of their own prosperity and the prosperity of their children and all children of the Soviet Republic! Our cry is: Mothers: learn to be loving mothers not only towards your own child but towards all children of our Workers’ Republic! But there is a lack of homes; we have not plenty of clothes for our nine million children; we have not paper enough for our school books, etc. That means our task is double as hard. And still we do all we can to feed the children and help the mother. All children in the towns are fed up to 16 years of age by the State.

I could write for hours about our “fairy tale” land where the sunny side of creative work is darkened often by many shady sides of our life and tactics. I am not always in favour of many of the tactical methods of our Party; I know how far we are from real Communism; but I feel we are on the way to it.

The biggest obstacle is removed: we have no private property, no capitalists to against I And if we suffer, we suffer more because the production in the whole world is disorganised; the productive forces have not developed during these terrible years of war. But we are going forward; we are beginning to organise our industry on new, communistic lines, and I believe we, sooner than any capitalist country, will enter into a period of prosperity. We work for the benefit of the social body — and we work hard, with enthusiasm.

If only the scoundrels, the capitalists of Great Britain, America, etc. would not always be doing destructive work, attacking Soviet Russia! But we see that their end is near. The workers of England and other countries are no longer fools; they know who their enemy is. And the movement is growing. I am sure your comrades all understand. Against unemployment, no other methods can help except the putting aside of all the gentlemen, the capitalists who DISORGANISE PRODUCTION by anarchistic methods of ruling industry and by means of never-ending competition!

I wish you success in your, or rather OUR work !