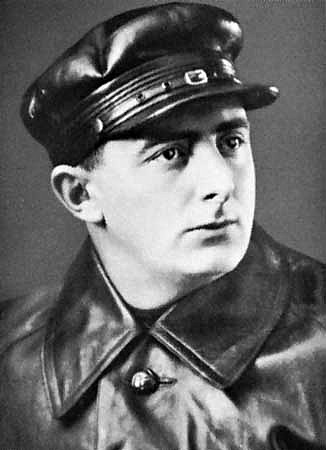 Dziga Vertov has just proved that it is possible to achieve great art on the screen without necessarily basing the film on a story, on a fable. In such a work, the relationship of the spectator to the film is no longer that of a man who participates in the lives of the characters in a fable through a sort of necessary simulation, but that of a man forced to enter a certain universe, a relation with an ordered poetic matter that subjects him to its own laws. The connection with this latter order is considerably more powerful than with the former.

This is perhaps the first film showing what an epic cinema could be. Much political consciousness, poetic intelligence, and technical knowledge were needed to succeed in such an attempt at dealing with Lenin in order to succeed in balancing political teaching with poetic construction.

This is the triumph of montage, which is to film what structure and style are to the novel. The assuredness of the montage weakens in the third song, which relies on a more facile poetry whose technical resources don’t always overcome the effects of enumeration. But the first and second songs are among those rare works in which the cinema is the equal of the highest works of the arts of the word. The montage of images and sounds that connect the nomad’s yurt and the tumult of Red Square will become as famous in the history of the cinema as the Odessa Staircase scene of “Potemkin” or the lights of the wagons moving into the distance in Chaplin’s “A Woman of Paris.”

Vertov’s film suggests many other remarks. One of them would consist in asking oneself if the poetic treatment of sound and image is not the true goal of a cinema that will arrive at a full awareness of its power and means by abandoning to written literature the psychological treatment of feelings and thoughts.

The second concerns the rarely illuminated problem of symbol and sign in the arts, and principally in the art of the screen. One could say that the symbol is a metaphor that expresses a relationship between two terms by an analogous relationship (in the mathematical meaning of the term) between two other terms belonging to a different genre of reality. In “The Road of Life” by Nikolai Ekk the relationship of the criminal to the new life incarnated by Mustapha is translated by the appearance of a toad in a peaceful décor. In an art destined for a large audience like the cinema, the need to be understood generally leads the author to employ only worn out symbols, metaphors both banal and void of any creative value. The avant-garde films of the West that used symbols that weren’t worn out remained generally unintelligible to a public not made up of specialists in the deciphering of metaphors. Only an artist of the first order can dare and succeed in the fabrication of symbols that are new yet intelligent. There don’t yet exist any in the history of cinema, though Chaplin has sometimes approached the solution to the problem.

The sign is an image or an object which, belonging to a given order of reality, possesses the greatest possible sentimental or intellectual charge that reality can provide. The appearance of the sign sets off in the spectator the mass of feelings or ideas that make up that order in its entirety. Vertov, who knows the dangers of the symbol, has constant recourse to the sign, because this use of signs permits him to obtain a nearly constant contact with his spectators. Gorky’s bench in the silence is the same type of poetic sign. The same can be said about the plane of the kolkhoz members that arrives and banks for the spectator. An effective use of signs dispenses one from the use of all the rhetoric, all the means of amplification, of all the effects of quantity that Vertov himself doesn’t completely escape from in the part of his film constructed on the theme, if Lenin was now among us...

“Three Songs of Lenin” will no doubt be a landmark in the history of the cinema.