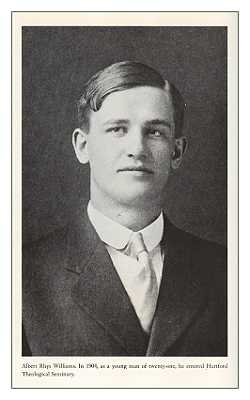 Albert Rhys Williams (28 Sept. 1883 - 27 Feb. 1962), North American syndicalist, journalist and protestant minister, was a witness to and participant in the Octiber Revolution in Russia, and a friend of John Reed and V. I. Lenin.

While a student at Marietta University in Marietta, Ohio, 1900-1904, Williams edited the university newspaper and helped organize a union of retail employees. At Hartford Theological Seminary, 1904-1907, he edited a labor column for the Hartford Evening Post. After graduating with a preacher's license, Williams worked in the shelter of the Presbyterian Church on Spring Streets in New York  in the Summer of 1907. It was in this period that he met and worked with Norman Thomas, then a Presbyterian seminarian, but later a presidential candidate on the Socialist Party ticket. Later, while studying on scholarships at the University of Cambridge and the University of Marburg, in 1907-1909, he met members of the British Labor Party and other socialists. Once back in the United States, he worked for the presidential campaign of socialist Eugene Debs in 1908.

Between 1908 and 1914, Williams served as a minister at Maverick Congregational Church in East Boston. From the pulpit he urged his congregation to fight to improve the world and raised funds to support the 1912 textile strike in Lawrence, Massachusetts. In 1914, on the eve of the World War, he requested leave of absence from his post and traveled to Europe where he worked as a correspondent for Outlook magazine.

In 1917, employed by the New York Post, he traveled to Petrograd to report on the revolution then in progress. He spent the Summer of that year traveling throughout Russia, gathering opinions and studying the attitudes and activities of various sectors of the Russian people. In the Fall, he returned to Petrograd and joined his compatriots,  journalists John Reed and Louise Bryant. Together they witnessed the October Revolution.  In Petrograd Williams met and befriended V. I. Lenin, whom he considered "the most civilized and humane man I have ever known."  Williams gave an account of those days in his book Through the Russian Revolution (1921).

Williams, as well as Reed and Bryant, became convicted supporters of the communist cause, although, unlike Reed, Williams never had a party affiliation. In Russia, they worked for Leon Trotsky, writing propaganda for distribution to German troops. Williams' job was to edit the illustrated newspaper, Die Revolution Russiche en Bildern (The Russian Revolution in Pictures). When the German army approached Petrograd, Williams volunteered to enlist in the Red Army but was commissioned by Lenin to organize an International Legion. In 1918, on his way to the United States, Williams crossed Russia by train, arriving Vladivostok in time to witness the landing of counterrevolutionary troops, including an American contingent. Arrested on several occasions by the White forces, he barely managed to escape with his life thanks to money loaned by communist workers that allowed him to hire passage on a Chinese boat.

Back in the United States, he dedicated himself to writing and speaking about the Russian Revolution and advocating for support for the Soviet regime.

Williams returned to live in the USSR between 1922 and 1928. After visiting her again in 1930-1931 and in 1937-1938 he confessed he was "baffled" by the actions and attitudes of Stalin, who was purging the Communist Party and promoting forced collectivization of agriculture. However, Williams preferred to continue his support for what he considered the only country with a consistent foreign policy and, in order not to fuel the reigning anti-communist hysteria, he never spoke publicly of his concerns. In 1957, invited by the Soviet government, Williams and his wife, Lucita Squier, traveled for the last time to the USSR and stayed for several months while Albert received treatment for leukemia.

Theologically, Albert - the son of a minister in the Congregational Church - ended his days a member of the Unitarian Church, in which his son Rhys was a minister. At the end of his life, Albert Rhys Williams wrote that "If I have remained true to the Revolution and still look forward to the final triumph of socialism in the world, it is because, like Lenin, I do believe in the essential goodness of man"

1919: The Bolsheviks and the Soviets

1919: Russian Soviets - Seventy-Six Questions and Answers on the Workingman's Government of Russia

[1919?]: "The Red Funeral of Vladivostok" (in Shall Socialism Triumph in Russia, pub. by Alberta Provincial Committee of the Socialist Party of Canada)

1921: Through the Russian Revolution