Memorandum to Hermann Jung about the Conflict in the Paris Section 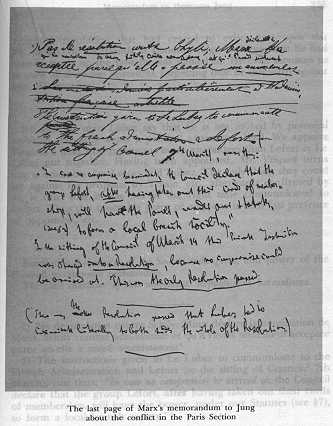 On March 12, 1865, Hermann Jung, who had been instructed to write notes for the information of the International’s members in France about the conflict in the Paris Section, asked Marx to help him. Marx agreed and on March 18 he met Jung and handed over to him a memorandum written on three sheets of paper. The result of their talk was the text on the back of the first sheet, written partly by Marx and partly by Jung.

In his memorandum Marx showed that the essence of the conflict was in the bourgeois democrats’ encroachments on the class character of the international proletarian organisation and drew attention to the French refugee Le Lubez, who constantly supported the bourgeois republican Lefort. Marx, in particular, noted Le Lubez’s striving to coopt Lefort’s supporters into the Paris Administration and his opposition to the Central Council’s decision on this issue adopted on March 7, 1865. Le Lubez and his followers were rebuffed and he was forced, in early April 1865, to give up the post of Corresponding Secretary for France.

This document was published in English for the first time in The General Council of the First International. 1864-1866, 1962.

Sub-Committee Sitting. 4 March. He [Victor Le Lubez] wanted already to move his resolution, according to which the Paris Administration was to be composed as follows: Fribourg, Vinçard, Limousin, 3 members to be designated by Lefort, Schily as a sort of umpire.

Sitting of the Central Council. 7 March. He allowed the appointment of Schily to pass without division, that is, he accepted it, speaking in a parliamentary sense.

After this had taken place, he writes in hot-haste to Paris, even before he had the Resolutions in his hand. He expected, as he said (14 March), that the Paris Administration would protest against Schily. As by Resolution V (Resolution V. The Administration at Paris having expressed its readiness to acknowledge a direct delegation from the Central Council, the Council accordingly appoints Citizen Schily to be its delegate to the said Administration.) Schily was only accredited to that Administration, his appointment could only be protested against by them.

Having failed with them, Lubez conspires with the brothers of his lodge, to declare Schily’s appointment the cause of their Withdrawal.[239]

On the remark of Mr. Fox (last sitting of Central Council) that this forgetfulness of Schily’s nationality on 4 and 6 March, and his vivid recollection of it on March 14 could only be accounted for by his wish to revenge himself because of the slight he thought Mr. Lefort was put to, he accepted this plain explanation.

1-stly) As if the introductory words of Resolution V had been inserted as a catch-vote on false pretences. These words rest upon facts, Mr. Schily’s open letter, brought over by Lubez, read on March 7 in presence of Tolain, etc.; secondly Mr. Schily’s report, communicated to the Sub-Committee; lastly the resolutions passed by the meeting of 24th February at Paris.[240] The words were only inserted to avoid even the appearance of dictatorship on the part of the Central Council.

2-ndly) There had on March 7 time been killed by personal altercations in order to hurry the acceptance of the 3 last resolutions; carry them by surprise.

3-rdly) Mr. Schily was no ouvrier. Rejected as principle by Resolution II. [the concluding part of Resolution II reads: the Council “protests that it does not sanction the principle that none but air ouvrier is admissible as air official in our Society"] Schily had only to act privately with the Paris Administration; Lefort was to act upon the public stage before the world in the name of the Association. The cases not analogous.

He asks us to appoint him Defender General in the French press. We do so because we suppose him to act in understanding, and in concurrence with Tolain, etc. This nomination so obtained, he turns afterwards against us into a legal title. On Tolain’s letter, and before Lubez was sent to Paris, we cancel this appointment, as far as Mr. Lefort’s name and public position is concerned. (We reduce it to this: he is allowed to write articles not signed by himself, but by an ouvrier — a thing which he might have done without our consent.) That such is the case, results from an angry letter he then wrote to Lubez, but he yielded. The Paris meeting of February 24th committed only this blunder that it protested against a resolution that had ceased to exist. And upon this Mr. Lefort, or his friends at London, feign to forget that he had already given up the post he was named to. He even menaces us to warn all democrats against us, forgetting that we can warn against him, if necessary.

He and his man Lubez say that he is not moved by personal ambition. He only wants a political guarantee. Well. We appoint Vinçard, a man who represents more guarantees than Lefort et Le Lubez put together. Having been appointed, Mr. Vinçard turns into a nonentity for Lefort and Lubez. The only thing they could say against his proposal by Tolain, etc., afterwards confirmed by us, is this: that it was not at the right time communicated to Lefort. Thus this miserable point of etiquette is their last pretence of opposition, etc.

International character of the Society endangered, and power of the Council to appoint ambassadors.

The class character of this movement. Républicains formalistes.

2) The instructions given to Le Lubez to communicate to the French Administration and Lefort (in the sitting of Council, 7th March), run thus: “In case no compromise be arrived at, the Council declare that the group Lefort, after having taken out their cards of membership, will have the power, under our Statutes (see §7), to form a local branch society. —

In the sitting of the Council of March 14 this private instruction was changed into a resolution, because no compromise could be arrived at. This was the only resolution passed.

(There was the other resolution passed that Lubez had to communicate literally to both sides the whole of the resolution.)

239 The protest against the official appointment of Schily as the Central Council’s representative in Paris came from the French bourgeois-democratic refugees, members of a Masonic lodge in London. They also belonged to the French Section in London which had several representatives on the Central Council. The protest was read out at the Council meeting on March 14, but was waived on the insistence of Marx who informed all the present at the meeting of Schily’s intention to reject the appointment.

240 On February 24, 1865, the Paris Section of the International called a meeting over the appointment of Lefort as the Association’s “Counsel for the literary defence” in Paris. The meeting protested strongly against this appointment, believing that Lefort would exploit this to seize leadership in the Paris Section. The meeting adopted a resolution drafted by Limousin which showed, the sectarian position of the French Proudhonists in relation to the intellectuals. It stressed that if the purely working-class character of the Association was to be preserved, only workers should hold leading positions in it. The resolution, signed by, 32 members of the Paris Section, was brought to London by Tolain and Fribourg.