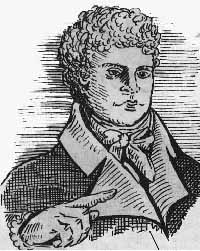 Criticism of Hegel
(from Engels' notes)

The philosophy of identity, as I have set it out, was only one aspect of the whole philosophy, namely, the negative aspect. This 'negative' had either to be satisfied by the presentation of the 'positive', or, absorbing the positive content of previous philosophies, to posit itself as the 'positive' and hence to set itself up as absolute philosophy. Over the fate of man also presides a reason which makes him persist in one-sidedness until he has exhausted all its possibilities. Thus it was Hegel who established the negative philosophy as the absolute philosophy. I mention Herr Hegel's name for the first time. Just as I have expressed myself freely on Kant and Fichte, who were my teachers, so will I also on Hegel, although it gives me no pleasure to do so. But I will do it for the sake of the frankness which I have promised you, gentlemen. It must not appear as if I had anything to be afraid of as if there were points on which I could not speak freely. I recall the time when Hegel was my listener, my comrade in life, and I must say that while in general the understanding of the philosophy of identity was shallow and superficial, he it was who saved its fundamental thought for the time to come and acknowledged it constantly to the last, as his Vorlesungen über die Geschichte der Philosophie above all proved to me. Having found the great material already mastered, he concerned himself chiefly with the method, while the rest of us preferred to concentrate on the material. I myself, not satisfied with the negative results achieved, would readily have accepted any satisfactory conclusion, even from a stranger's hand.

Incidentally, the question here is whether Hegel's position in the history of philosophy, the position which is to be accorded to him among the great thinkers, is precisely that he attempted to raise the philosophy of identity to the absolute, the final philosophy, a thing which could be done, of course, only with significant changes; and this I intend to prove from his own writings, which are open to all the world. If one were to say that this is precisely what Hegel is to be reproached with, I would reply that Hegel did that which lay closest to him. The philosophy of identity had to wrestle with itself, to transcend itself, so long as the science of the 'positive', which covers existence as well, was not yet there. Hence in this endeavour Hegel had to raise the philosophy of identity above its limitation, the power of being, the pure ability to be, and to make existence subject to it.

Elsewhere it does indeed occur and is part of Fichte's legacy. Fichte, with whom I did not wish to break outright, arrives through it at his immediate consciousness, the 'I'; from this, I went further and thus arrived at the indifference. Since in intellectual perception the 'I' is no longer regarded as being subjective, it enters the sphere of thought and thus its existence is no longer immediately certain. Accordingly, intellectual perception would not even prove the existence of the 'I', and though Fichte uses it for this purpose, I cannot base myself on it to prove from it the existence of the absolute. Hence Hegel could not reproach me for the inadequacy of a proof which I never wished to provide, but only for not having stated explicitly enough that I was not at all concerned with existence. For if Hegel demands proof of the being of the infinite power he goes beyond reason; should the infinite power exist, philosophy would not be free of being, and we must here ask whether something prior to existence can be thought. Hegel denies it, for he begins The logic with being and proceeds directly to an existential system. But we affirm it, by beginning with the pure power of being as existing only in thinking. Hegel, who so often speaks of immanence, nevertheless is only immanent in that which is not immanent in thinking, for being is this non-immanent. To retreat into pure thinking means in particular to retreat from an being outside thought. Hegel's contention that the existence of the absolute is proved by logic has the further disadvantage that in this way one has the infinite twice, at the end of the logic and again at the end of the whole process. In general one cannot conceive why the logic is put first in the Encyclopaedie, instead of pervading and animating the entire cycle.