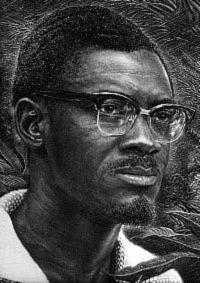 Question: "Some of your political opponents accuse you of being a Communist. Could you reply to that?" Answer: "This is a propagandist trick aimed at me. I am not a Communist. The colonialists have campaigned against me throughout the country because I am a revolutionary and demand the abolition of the colonial regime, which ignored our human dignity. They look upon me as a Communist because I refused to be bribed by the imperialists." (From an interview to a "France-Soir" correspondent on July 22, 1960)

“We are neither Communists, Catholics nor socialists. We are African nationalists. We reserve the right to choose our friends in accordance with the principle of positive neutrality.” The goal Patrice sought to achieve

May Our People Triumph
[alternative translation]

A Life given up for the People by Jean Bulabemba
The goal Patrice sought to achieve by N. Khokhlov
Patrice Lumumba's Second Life by Tomas Kolesnichenko
In the Struggle for Independence by Henri Laurent
Meetings with Lumumba by Romano Ledda
The Congo before and after the arrest of the Prime Minister by Oleg Orestov
Last days of Freedom by Lev Volodin
Such was Lumumba by Yuri Zhukov